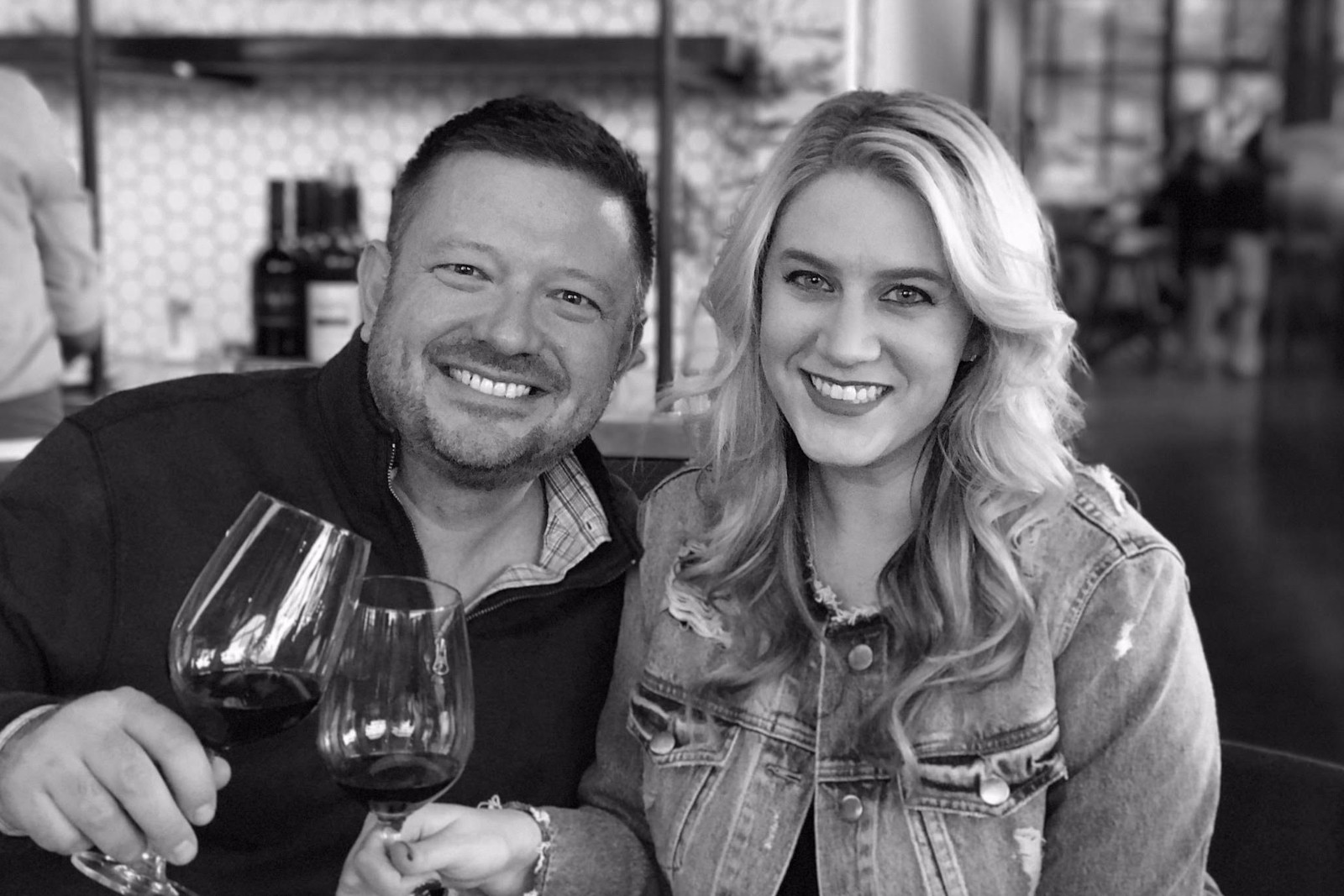 Kristen and Grant met in New York, a city that neither of them is from, but one that will always hold a special place in their hearts. Both relative newcomers, they spent their nights and weekends exploring neighborhoods, restaurants, music venues, and museums, falling in love with the city and each other.

When the time came to move in together, they crossed the Hudson and settled in Hoboken. While still able to keep their eye on downtown, they are just a little closer to Kristen’s parents in North Jersey and Grant’s daughters in Maryland. Grant is worried about picking up an unintended accent, while Kristen is openly hoping that he does so that he stops embarrassing her with his unique pronunciation of Jersey place names.

As their relationship blossomed, they discovered a shared sense of adventure and love of travel. Whether making a quick dash to Boston for a game at Fenway or down to LBI for some BBQ and fireworks on the beach, it’s a rare weekend that the couple isn’t motoring along some stretch of the I-95 corridor in search of fun. Longer journeys have seen them soaking up the sun in Vieques, St. Thomas, and Cabo, or checking out the scene in Miami, Nashville, and Scottsdale. Kristen’s all-time favorite destination is Napa—a place that has become an annual pilgrimage for the couple as they explore the vineyards and tasting rooms of their favorite winemakers.

Grant proposed to Kristen during a weekend trip to Newport, RI on October 27, 2017. His elaborate plans were almost shaken by Kristen’s desire to take a rest on a bench 200 yards from the Newport Harbor Lighthouse where he was planning to pop the question. He prevailed in motivating her for the last leg of the journey with a promise of even more spectacular views and there, during a beautiful sunset over the harbor, he asked and she said yes.

Kristen and Grant will be getting married on August 10, 2018 at Fiddler’s Elbow Country Club in Bedminster, NJ.

Please arrive at 6pm. Our ceremony will begin promptly at 6:30pm.
Get Directions

When Kristen met Lauren during a night out in Atlantic City with mutual friends, it was love at first sight. While their shared appreciation of matte lipstick brought them together, their mutual sense of fun, ambition, and loyalty to friends and family keeps them bonded like sisters (Kristen actually believes she is the fifth Engelhardt sister).

The first time Kristen witnessed Jess’s amazing toe touches and tumbling in middle school cheerleading, she knew that they were going to be best friends. Through broken noses, torn ACLs, and random encounters with aquatic wildlife, there is nothing that these two haven’t done together.

This New Jersey love affair began with two girls sitting in middle school English class finding out that they had shore houses around the corner from each other in LBI. They’ve been up to mischief ever since—speaking in their own secret language and creating fun and laughter wherever they go.

Like the hero of a children’s book, Kass is the gentle giant with a heart of gold. He and Grant met in a San Francisco tiki bar in 2009 and have been keeping it real ever since. Whether it’s one-sided hip hop battles (Grant never wins) or questionable drink choices (Kass loves dark and stormies), these two find fun wherever they go.

When Dave tells a story, his eyes light up and a Cheshire grin spreads across his face. He’s one of the only people in the world that can get Grant to shut up and listen—because he’s so damn funny. You should ask Dave how he and Grant actually met. It will be a wonderful story, if only partially true.

Andrew and Grant met standing next to each other during a failing company’s all-hands meeting in the middle of an industry-wide financial collapse. Like soldiers in a foxhole, the two became fast friends as the world rained down around them. To this day, there isn’t a piece of bad news that the two can’t turn into a laugh and an opportunity.

Chris and Grant met in a daiquiri bar on New Year’s Eve many lives ago. Not too long after, Chris gave Grant his first real job and has not been able to shake him since. Like the big brother that Grant never had, Chris is always there with advice, comfort and counsel that, like his editing, is always on point.

Peter and Grant met at an ASU faculty party a long time ago and have been arguing about “what it all means” ever since. Peter’s wanderlust has taken him around the world several times. After all these years, he’s still giving Grant new things to think about. Grant feels unbelievably lucky to have his oldest friend settling for awhile in Manhattan, and is grateful that he is able to join his union to Kristen.

The Bridgewater Marriott is located 15 minutes from Fiddler's Elbow Country Club. We have reserved a room block for our guests. Shuttle service will be available between the hotel and our venue before the service and after the reception.
﻿
The Bridgewater Marriott is located 30 minutes (33 miles) from Newark Liberty International Airport (EWR).
﻿
Discounted room rates are available through July 20th in the link below. If you are experiencing any issues with the link, please visit www.marriott.com/sosbw and enter Group Code HEKHEKA for a King Room and HEKHEKB for a Double Room.
Visit Website